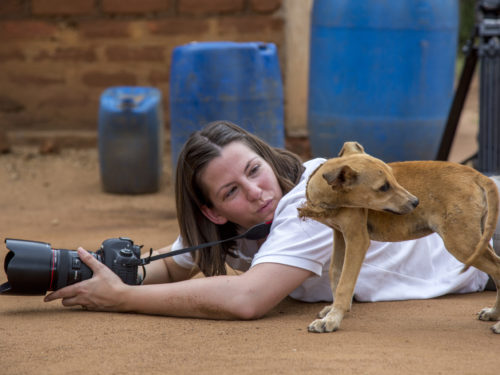 My passion for animals and the natural world actually started in marine conservation in my late teens. Through scuba-diving surveys I learnt to identify fish and invertebrate species and the damage fishing had done to the coral. Several years later, after an anthropology degree, I was still inspired to learn more about protecting wildlife and found myself on a primate conservation MSc.

While I was motivated by the topic I struggled with genetics and statistical analysis. I recognised that my strengths weren’t in the technical aspects of science research, but in spreading the word and engaging other people in why research, protection and preservation were critical.

Science communication was the right fit for me. I spent ten years working in animal welfare for the not for profit sector, in communications. Being part of the process that translates robust research into digestible and engaging content for a variety of audiences is extremely satisfying. I specialised film and photography as it’s an effective tool to provide evidence of an issue and inspire change.

As a freelance consultant I’m delighted to be able to work with a diverse range of issues and groups. I’m focused on developing my skills to be able to assist with human behaviour change for animals.

A chat with Georgina

At the start of my bachelor’s degree in anthropology I was leaning towards the social side as I was fascinated by people, traditions and culture, but after some compelling modules in primatology and I was swayed!

After my degree, and some fieldwork in Borneo, I decided to pursue a masters in primate conservation. I found elements of the MSc tough; I had never done genetics before and statistical analysis is not my strong point. I cared passionately about the cause, but recognised that I had more skill and value at explaining to people why research, preservation and protection are so vital, rather than carrying out the work itself.

After my MSc I looked for a science communication role and spent 10 years working in communications in animal welfare, for the not-for-profit sector. My focus was on film and photography. Multimedia can often be overlooked, but is such an important part of any campaign – it provides evidence and authenticity and is a fundamental tool. To witness the distress of an animal or capturing behaviour change as a teaching tool, can be a powerful step to improving the lives of animals.

If we want to affect lasting change we need to understand and facilitate behaviour change. We need to break patterns of behaviour while offering an alternative.

After a hurricane had damaged shelters and crops in the South Pacific, a group of small holding owners had been gathered for a workshop on protecting animals in disasters.

They were first asked what humans need to survive – they easily responded with water, food, shelter, healthcare and social interactions. Then they were asked what animals needed. It was extraordinary to witness their collective realisation that animals needed the same basics as humans. One woman admitted she had never provided water for her goat as she hadn’t realised it needed it.

Many animal owners that don’t know how to take care of animals properly are uneducated rather than unkind. They need guidance, support and encouragement. At the community event our vet team were able to show them how to utilise the resources around them to prepare and store food. They were such enthusiastic participants and we were able to give them knowledge and skills to continue forwards.

I want to fly the flag for communications and particularly multimedia content for behaviour change. Often they can be an afterthought, but are such essential assets. Getting to know our audience, tailoring our delivery, framing our messaging, using powerful visuals can aid learning and understanding. I’d like to see communications techniques more confidently and widely used for behaviour change.

I learnt a lot from Suzanne when she ran a human-behaviour change programme for equines at WSPA. As I was leaving the organisation and going freelance, Suzanne asked if I was interested to run a workshop on storytelling, which has led to an ongoing relationship.

I’m thrilled to be involved with HBCA and work with a wide range of participants and groups – the potential to learn and share skills is extremely motivating. I relish being around passionate and inspiring folks, which this issue attracts in bucket loads. I am also enjoying the challenge – being asked to share and workshop a topic forces you to interrogate your subject and keeps you on your toes. It’s important not to be stagnant and to keep growing and learning.

Approach each topic with an open and curious mind – try not to have preconceived ideas about what might motivate a group of people to behave in a certain way.