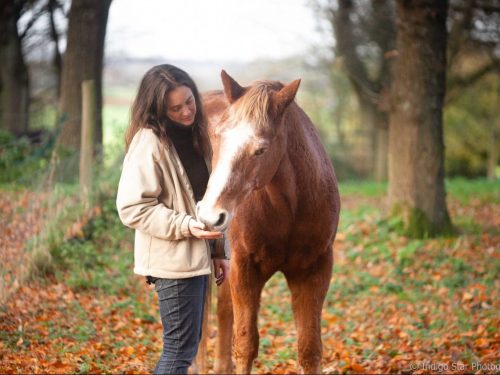 Catherine is an Equine Behaviourist and Independent Barefoot Hoof Trimmer. She started her working life in academia, obtaining a PhD in astrophysics and conducting research into black hole systems for 10 years. Her interest in human behaviour, equine behaviour and hoof-care evolved in parallel to this as she strived to meet the needs of her quarter horse, Jak. What started as an interest for his sake gradually became a job. When her children were born in 2008 and 2010 she left research in favour of full-time parenting and home education but continues to run her behaviour and hoof-care business alongside. She has a particular interest in promoting autonomy for both horses and humans in their interactions, maximising welfare whilst still enabling people to achieve their goals.

Catherine founded the Thinking Horsemanship Forum in 2003, providing an online platform for exploring the (then) new ideas regarding training horses with positive reinforcement and debating what we mean by “ethics” in horse training. She was also a founder member of the Equine Behaviour and Training Forum, an entirely voluntary organisation providing non-commercial evidenced-based information to the general public. Catherine is qualified as a Certified Horse Behavior Consultant with the IAABC, registered as a behaviourist with the ABTC and has nearly finished a BSc. Psychology.

A chat with Catherine

My introduction to thinking about human behaviour change came when asking advice about my horse’s behaviour. The trainer recommended I read “The Road Less Travelled”, something I initially dismissed since “I didn’t really do self-help books”. By chance I saw the book at a relative’s house and borrowed it. It gave me a new insight to everything: how I viewed myself, my relationship with my horse and the world at large. I started to see my horse’s behaviour as a reflection of myself and a source of information as to how I could grow as a person. I continued to read self-help books (nothing too wafty, there are limits!) and my interest in human behaviour evolved into counselling, behavioural economics and self-determination theory. In practice this meant unpicking my motivation whenever a horse, client or my children had an opinion different from my own. Why did I want to change their behaviour? Was this about me or them? What did I need to do differently in order to promote their autonomy instead? How can I change my behaviour to benefit the animal instead of expecting the animal to comply with me? Such an approach has led me to create partnerships with clients and their animals that are based on mutual trust and respect. And consequently, the behaviour change from clients and animals for which I would have hoped generally follows.

Improving the lives of animals generally involves asking humans to change their own behaviour. Changing the behaviour of humans generally involves helping them to overcome previously held ideas and to trust in new ideas, often in the face of inner doubt and scepticism from peers and family members. Thus support and advice are needed for the (often) emotionally turbulent journey into something new. Without a foundation of knowledge about human behaviour change, these attempts routinely risk failure and the lives of animals improve only in the short-term, if at all.

I attended the 2016 Human Behaviour Change conference and saw Manoj Gautam give his fabulous presentation about his work improving animal welfare in Nepal. He received a standing ovation and there were many not-very-dry eyes in the room.

What particularly interested me about his talk was in the context of the talk that I gave, about Robert Cialdini’s Six Principles of Influence and how I thought they should be adapted into a model of more ethical change. During the conference we saw many examples of successful behavioural interventions but I believe Manoj was particularly successful because he was the only one to have incorporated into his work all six of the ethical principles of change that I identified.

My work with behaviour change is very much at the individual client level so I’m a little unfamiliar with what is going on at a larger scale. General awareness that HBC is a phenomenon definitely seems to be growing and expanding to a wider range of fields. I see that continuing to happen. Having spent so many years running an online forum I am interested in how HBC is conducted over social media – and how poorly people’s attempts to influence each other seem to turn out. I think this is a potentially interesting area that may start to see more prominence as our dependence on social media continues to grow.

I have known Suzanne since 2003, initially through a shared interest in equine behaviour. The equine behaviour workshops we attended always included an element looking at our own behaviour and we have never looked back.

Initially I saw it as a route to personal growth in a way that would benefit my horse. With time I realised it improved all areas of my life. When applied to client situations I find it enables me to forge a positive working relationship that leads to behaviour change for the sake of the animal but without resorting to bossy manipulation of the client.

Forge a positive working relationship and aim for a small, easy win in the early stages