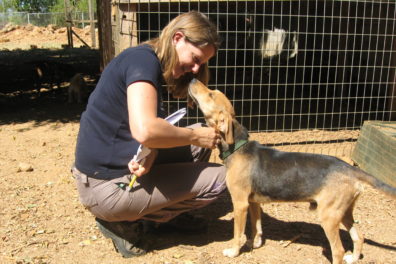 Suzanne has worked in several very different roles that together have paved the way for being the co-director of HBCA. After graduation she worked in science publishing – initially as a science journalist and later managing several journals. In her spare time she re-qualified in animal behaviour and welfare and gained extensive practical experience with several organisations. She founded Learning About Animals through which she organised educational events and undertook consultancy projects. She is also active as an IAABC-certified horse behaviour consultant.

Through extensive travel to developing countries Suzanne gained interest in transport animals and in 2005 joined the Board of the World Association for Transport Animal Welfare and Studies (TAWS). She is co-founder and Programmes Director of Change For Animals Foundation (CFAF), co-founder and Trustee of the Aquarium Welfare Association and Trustee of the World Cetacean Alliance (WCA).

In 2007, she became the Programmes Manager of the Companion Animal Unit at WSPA (now World Animal Protection). She managed several dog population and working equine programmes. The role was to develop and test participatory methodologies – working with communities to change the way they manage and care for their animals. Suzanne led the move away from a heavy focus on mobile clinics towards prevention through participatory approaches. To reflect the broad applicability of the approach she became the Technical Advisor for Human Behaviour Change Programmes. Since 2011, Suzanne has worked as an international consultant for animal welfare and human behaviour change. In 2016, she co-founded Human Behaviour Change for Animals CIC with Jo and the rest is history!

Please get in touch by emailing: info@hbcforanimals.com