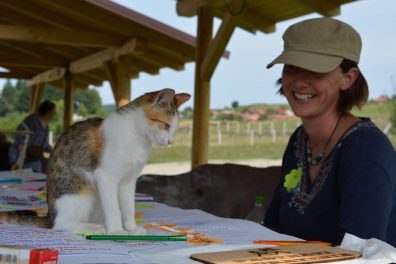 Human behaviour change is at the heart of all the work Jo undertakes in animal welfare. As co-founder of the social enterprise Human Behaviour Change for Animals alongside Suzanne, she is committed to making a difference. A life-long passion for animals has resulted in a career that spans nearly three decades working with and connected to animals. From its practical beginnings with horses who remain a constant, to developing and implementing international projects to deliver behaviour change to improve animal welfare, including the human animal.

Jo’s interest in behaviour led to an increasing focus on the role of the human animal in sustainably improving the wellbeing of animals. Using the principles and theories of human behaviour change within her work, including research, education, training, campaigning, communications, advocacy, project design, and strategy development. She has worked to deliver positive change through building capability, creating opportunity and developing motivation among the people and communities involved with animals.

Jo has an MSc in (Human) Behaviour Change, a Degree in Equine studies, a Certificate in Campaigns, together with varying practical equine qualifications. During her Master’s Degree Jo undertook research exploring the potential for human habit formation and change to deliver sustainable improvements for animal welfare; this research is now ongoing.

In her earlier career Jo worked as an equine trainer and yard manager, as an equine studies lecturer at FE and HE level, and in publishing as an editor of equestrian magazines and educational materials. In 2001 she became Campaigns Manager for the then International League for the Protection of Horses, which went on to become World Horse Welfare. During her ten years at the charity she was promoted to the Senior Management Team as Director of Campaigns and Communications.

Jo developed and led a number of international welfare projects seeking improvements, through influencing and supporting change. Examples included the campaign to end the long-distance transport of horses and donkeys for slaughter. This work successfully delivered changes to legislation that improved welfare – including a reduction from over 160,000 to around 26,000 horses and donkeys being transported each year. In 2010 she was awarded the British Equine Veterinary Association Welfare Award, for her work on this campaign. Examples of others areas of focus include UK and EU animal welfare policy and legislation, work on equine disease and movement, capacity building in Romania, and the change process associated with rebranding World Horse Welfare.

Jo’s ambition of running her own company became a reality in 2011 when she set-up the social enterprise Progressive Ideas. She has since worked with a variety of UK and international NGOs, universities, policy makers, commercial organisations and individuals, covering a myriad of different animal welfare projects where understanding human behaviour and behaviour change is central.

Following the success of the first International Conference for HBC for Animal Welfare in September 2016, and their recognition of the need for an organisation supporting those seeking to utilise behaviour change, Jo and Suz set-up HBCA. They haven’t looked back since, and in 2017 registered HBCA as a Community Interest Company, functioning as a social enterprise. They now work with a team of experts delivering new and exciting projects and initiatives, and have ambitious plans to develop HBCA over the coming years.

Please get in touch by emailing: jo@hbcforanimals.com